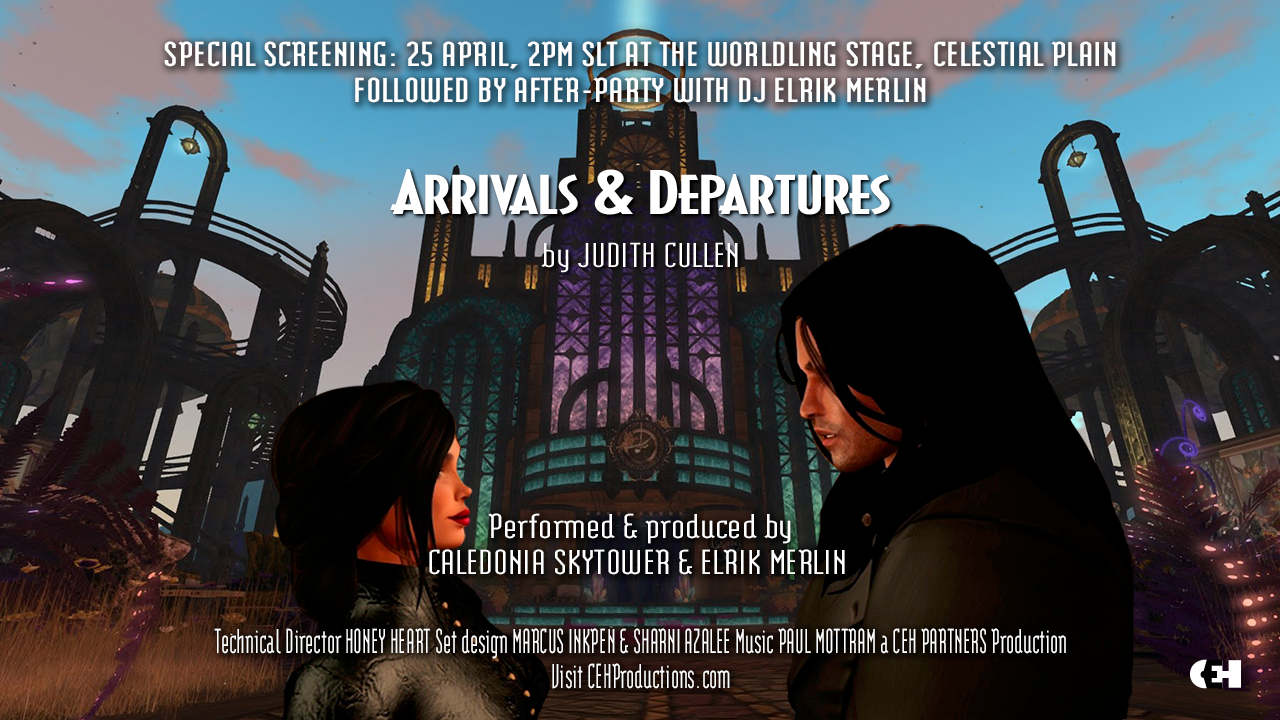 Arrivals & Departures was written by Caledonia just over a year ago, at Fantasy Faire 2018, and we recorded the radio version almost exactly a year to the day before the special screening we held at Fantasy Faire 2019, in the Worldling Stage area of the Celestial Plain.

We were pleased to see that we completely filled the region with a very appreciative audience. Thank you to you all who came along. We followed the screening with an after-party consisting of a DJ set from me, Elrik Merlin.

Prior to the event, an article was published on the Fantasy Faire web site, presented as an interview between me and Zander Greene, one of the three leads of the Faire. Zander also provided us with a very pleasing comment from Jeff Montegut of the American Cancer Society*.

An interesting project to emerge from last year’s Fantasy Faire was the short film, Arrivals & Departures, which receives a special screening this year at 2pm on April 25th at the FaireChylde. Based on a short story by Caledonia Skytower, the story was originally recorded for the Tales of the Fairelands series on Fantasy Faire Radio. Faire co-organizer Zander Greene talked to Elrik Merlin, one of the triumvirate that produced the movie and played one of the two main characters.

Zander Greene: It’s such a beautiful story. How did it come about?

Elrik Merlin: One of the features of the Fantasy Faire Literary Festival is that writers and poets are invited to immerse themselves in the atmosphere of the individual Fairelands and write stories inspired by them. Caledonia Skytower has always been a prolific participant in this aspect of the Faire, and she was inspired by the amazing steampunk spaceport that was Erstwhile Station, created by The Looking Glass – Sharni Azalee and Marcus Inkpen.

I know you and Caledonia have worked together many times. How did you come to be involved with this project?

Caledonia came along to me and asked if I would like to read and produce it for the radio recording. I took one look at it and it made me shiver, it was such a powerful piece of writing – it’s essentially about our attitudes to death, but it’s a story of hope, too, and the importance of storytelling. I also knew I couldn’t read it alone: in my view, it needed two voices, representing the male and female characters. I suggested to Cale that she might rewrite it for two voices and we should record it together. And that’s how we did it. Sometimes something comes along that you know intrinsically is really special, and you have this unique opportunity to help bring it to life. This was one of those very rare things.

There is so much depth in the story and in the characters. Tell us about the experience of performing it.

It was a tremendously moving experience. The story has depth and levels: it moves in stages from the outer, public arena symbolised by the main hall of the spaceport, where people are coming and going, through a more personal scene in the lounge, to the private, inner world of feelings and intentions represented by the final scene, getting more and more intense. I found the ending very difficult to read. It was very emotional. And we pretty much did it in one take apart from a little tidying up. Then I licensed a piece of music for the project that complemented it perfectly. We had the radio version essentially completed while the Faire was still in progress.

It started as words on a page. How did it evolve from that to a film?

It kind of “just happened” actually… Caledonia, Honey Heart of Elite Equestrian and I were talking about it during the Faire and somehow from somewhere came this idea of making a film of the story. And the three of us set up a production company – CEH Productions – to do it.

A film version must have presented a great many challenges. How did you start?

We had to get the use of the Erstwhile Station. The build was being auctioned at the end of the Faire, so we gathered up all the spare Lindens we had and went to the auction. We were out-bid on the second bid! We immediately dashed off notecards to Carmella, the winning bidder, and to Sharni and Marcus to ask if we could borrow the build for a while – it was supposed to be a one-off, we couldn’t just buy a copy – and they kindly lent it to us for the shoot. Honey Heart, who is an absolutely brilliant project manager, and was the technical director for the film, organised a region for the build and set it up.

Was there much need to adapt the material as it moved from sound to screen?

We hardly did, in fact. The audio is very nearly unchanged from the radio version. We left everything in, including the descriptive elements, and we shot pretty much exactly what the story says.

That’s a bit unusual, to have the characters actually describe on the soundtrack what they are seeing and doing, rather than simply dialog.

A lot of it was down to another challenge – our biggest. It’s very hard to get decent expressions and gestures in Second Life, especially without the time and resources to commission special ones. This was particularly true for the male character, whom I played. The irony is that if we’d done it a few months later we could have had much better lip-sync and gestures that we simply didn’t have at the time. But my feeling was that if we told people what they were seeing, they would be better able to suspend belief about the shortcomings. And I think that worked to an extent.

You’re no stranger to filming in SL. What was that process like for this project?

Caledonia and I both shot a scene simultaneously when we could – though it wasn’t always possible: there were shots where only one of us could film as the other was busy acting. The opening shot, for example – it’s our equivalent of the opening of Touch Of Evil: a single aerial tracking shot that goes from behind the mountains to reveal the Station and then gradually zooms in on Cale as she makes her way to the steps, walks up them and into the station itself. It’s actually two takes with a cutaway. Cale and I shared dailies and made sure we had everything covered, and we had to shoot some scenes quite a few times. So we had plenty of footage for me to edit. Top film editor (and sound designer) Walter Murch became our spiritual guide when it came to the editing. I learned a vast amount from his In the Blink of an Eye. And in some ways it was a bit like shooting a music video: the soundtrack was a given and we shot and edited to that.

The three of you working day-to-day on the film were thousands of miles apart – Cale is in Washington State, Honey is in Michigan and you are in Scotland – but the story and the relationship it’s about are very intimate. How did that work?

We are all used to dealing with Second Life being set in Pacific Time and we found common times that we could work together. As far as shooting was concerned, we co-ordinated everything via Skype audio and we are used to relating to people in-world: that’s one of the key things about immersive virtual environments. Irrespective of our physical locations and time zones, we felt we were in the same place, at the same time, and that’s what mattered. The distances dissolved.

For some of the scenes you needed quite a few extras.

Yes we did, and we pulled in our friends to help. They were great, and Honey did amazing things to make it all happen, like arranging teleporters so that people could rapidly get to the right places at the right times, and developing detailed Metaharper scripted paths for key characters. There was often an interplay between characters following pre-set paths while the extras were just told to carry out some activity – like the shots of people streaming from Arrivals to the exit while Cale’s character makes her way across to the lounge. Cale’s path was scripted but the extras were just asked to flow around her. Which they did beautifully.

How has the film been received?

We’ve had a great reaction overall. Second Life audiences discount the flaws I’ve mentioned almost automatically because they are so used to them; real-life audiences notice, but then they too thankfully disregard them. When people talk to us about the film they talk about the story and what it means to them, which is the point, really. We’ve had some great compliments – including from ACS* – and we’re glad it’s had such an impact.

*“Here is a story with so much to say about friendship, love and loss, and which turns its eye toward a hopeful horizon. Their message is a comfort to all who have held a loved one’s hand and said goodbye. For that, Relay For Life and the American Cancer Society are profoundly grateful.”
–Jeff Montegut, American Cancer Society

If you have yet to see Arrivals & Departures, you can watch it below.